Music is Everything to Me – January 2009
The Opera Universe of Goran Dime, Tenor

First, he studied economics, successfully passing his exams, and afterward tried his skill as an actor. And then one day, he sang in a theater performance and has never stopped.

There are many reasons to talk with Belgrade tenor Goran Dime. At the end of November, at the home of the Belgrade Philharmonic Orchestra, he held a humanitarian concert for UNICEF. He presented the program that he performed last year at the Festival in Carcassonne, in southwestern France. He performed with pianist Ivan Jovanovic and mezzo-soprano Violeta Poleksic, a member of the opera company in Strasbourg. And while more than praiseworthy critiques of the vocal achievements of Goran Dime continue, he is ready for new undertakings. In 2009, he plans to tour with a classical music repertoire in Serbia and introduce his first CD with pop songs that his friends Zika and Jelena from the group “Zana” have produced for him.

The artistic and life path of Goran Dime are set, along with his voice and singing commitments. Unlike the majority of our singers, he does not hide the fact that opera productions, at least those in Belgrade, have never attracted him. Concert performances are more appropriate for his sensitivity. Alone, eye-to-eye with the audience, in symbiosis with pianist Ivan Jovanovic, he feels the best. Although he finished lower music school in four years, he was unable to recognize his true vocation for a long time. First, he studied economics, successfully passing his exams, and afterward he tried his skill as an actor. And then one day, he sang in a theater performance and has never stopped.

“I realized that somewhere I had this suppressed desire and that acting was a path to discover it. As a child, people would pay me compliments, saying that I have a nice voice, that I’m musical, I have talent… I realized that singing should not remain just a dream, and so I went to work it. I was educated in Italy, privately, and after returning to Belgrade I have continued to improve,” says the artist who won over Belgrade by performing Neapolitan songs.

Asked why he chose Neapolitan songs, he says that his education in Italy surely mattered –there is where he discovered the music that is dear to him.

“After a few concerts in which I sang a classical program, concerts of Neapolitan songs followed, which won over both the audience and critics. Neapolitan songs are an integral part of the repertoire of opera singers, especially for us tenors. My affinity towards Neapolitan music is probably a consequence of the fact that I know the Neapolitan dialect. As I began the adventure of holding solo concerts, I had to be very careful about what I undertook in order to satisfy both the commercial and artistic sides, while being entirely self-confident. Neapolitan songs allow the repertoire to be organized so that you can get through a concert alone, with one break. Eventually, the story of Neapolitan songs turned into Italian songs. Now I’m dedicated to the promotion of a completely new program. These are songs by Francesco Paolo Tosti who is probably one of the most performed composers, but never wrote an opera. The program consists of 14 songs in Italian. The lyrics are written by Italian poets, and that is really something special,” says Goran Dime.

He considers that the condition of one’s voice is important for an artist. “Although,“ he laughs , “If you are in bad physical shape, your voice cannot save you. A singer has to constantly practice his repertoire. ”After so many years, Goran Dime even today goes to the classes of his professor Olivera Jovanovic three times a week, because he wants to be prepared when he enters the most mature level and his brightest years as a tenor. He compares singing with sports. “When you don’t sing for a time, your condition declines, and you need a certain period of time to get back in shape.”

The life of a solo singer is slightly more “limited” than the life of other artists. To the question of whether he adheres to the strict principles of a healthy life, he replies:

“This is an individual thing. In the history of music there is the story of Di Stefano and Del Monaco, two top tenors who were one another’s competition. Di Stefano spent his nights in the casino and performed the next day, while Del Monaco would not speak for three days and only wrote little notes. I, unfortunately, belong to the group closer to Del Monaco. It’s not that I write on slips of paper, but I have already found my personal biorhythm, and it’s important for me to take care of myself, because I am very sensitive. So, of course, smoking, using a loud voice and lack of sleep are completely out of the question. However, I guess it is normal to lead a healthy life regardless of one’s vocal cords,” says Goran Dime.

The support of his wife is invaluable in both his life and career. When he began to study and sing, they believed that their first years would be the most difficult and this difficult period would soon be behind them. However, it turned out that great glory does not come easily, and great wealth comes even harder. His wife Duda has actively participated in his career in different ways. Since she also has artistic talent, she helped in the design aspect of his work by developing his website www.gorandime.com and other promotional materials. 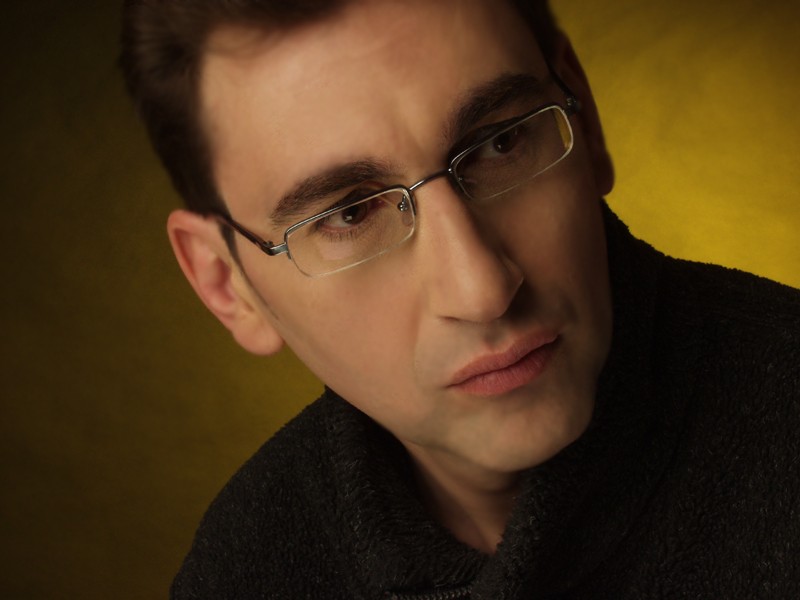 “I may well say that it’s her work as much as the work of my designer, Ivan Radosavljevic. I really owe a big debt of gratitude to her. It’s a great thing in life to have the support of those closest to you. Due to the large number of people who participate and compete in this field, it’s important for each story to be special. I primarily count on my musicality and a specific timbre. But, both the website and my whole visual identity are my attempt to be unique. Since music is really the most important thing in life for me, everything else that is outside of an hour of singing is less important and has completely another connotation, including this interview.”

He spent a few years in search of his image. He researched how he would feel best and how he would look in public. It took time for him to realize that despite the fact that he is mature in years, he just cannot put on a tie, because he feels funny when he sees himself in the mirror wearing one. So, instead, he has chosen less formal, but sophisticated, suits for his performances. He hasn’t performed in a tailcoat yet, because he is attentive to everything he buys from clothes to shoes. They must be the best, and a good tailcoat, he says, costs as much as a new “Yugo” car. The tailcoat will probably enjoy its debut in the Roy Thompson Hall, which is the “Sava Center” of Toronto, at the concert that he is planning for 2010.

Dime is, in fact, the nickname of this artist who wins people over with his magnificent tenor voice.

“I had problems with the last name. I don’t use my surname, Trpeski, in public. One time I am Trpevski, the next time Treski, Trpceski, there are thousands of variations, and that’s not even talking about abroad. So, I have simply made it easy for myself and others. Since my nickname is Dime, it was logical to have my nickname as my artistic name,” explains Goran Dime.

He speaks about what he listens to in moments of relaxation: “Most often, I do not listen to anything, because music excites me tremendously. I love to listen to great singers that I appreciate. Stevie Wonder was a revelation in music for me, and I have always loved singers who are fierce solo singers: George Michael, Freddy Mercury…That’s my taste in music. I listen to everything but folk music. Due to the small space of the apartment where we used to live, a professor in the lower music school suggested that my parents buy me a harmonica instead of a piano. I took lessons for four years, and during that period I didn’t learn to play even a single ‘kolo’ ” a traditional Serbian dance.

“I do not have a problem reconciling these two genres. I sing Tosti the same way I sing pop. I want that kind of music, which has a strong position in the world, to move in a certain way here, and, by my example, to open up new space for singers who have quality voices and can also sing pop. I enter the studio with the same level of concentration and work on pop songs the same way I do every single solo song or opera aria. Parallel career, why not? Look at Bocelli, whom I admire. Through commercial success, I hope to have then opportunity to perform in major concert halls in Serbia, perhaps singing both covers of Tosti’s and opera arias. The next step is to sing songs that are neither one nor the other, if the market allows it here. I am thinking about the great hits, like Sinatra‘s… 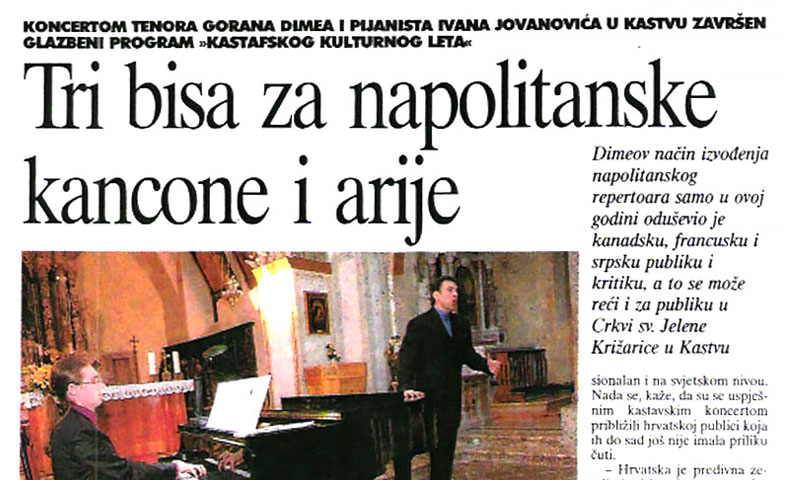 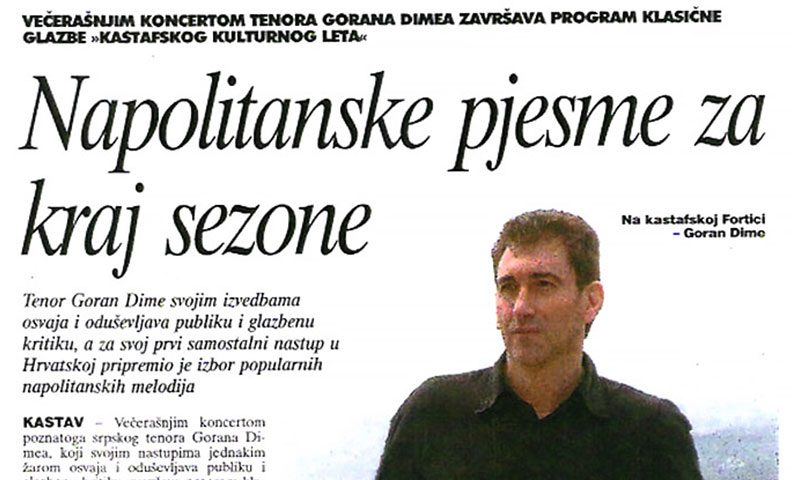 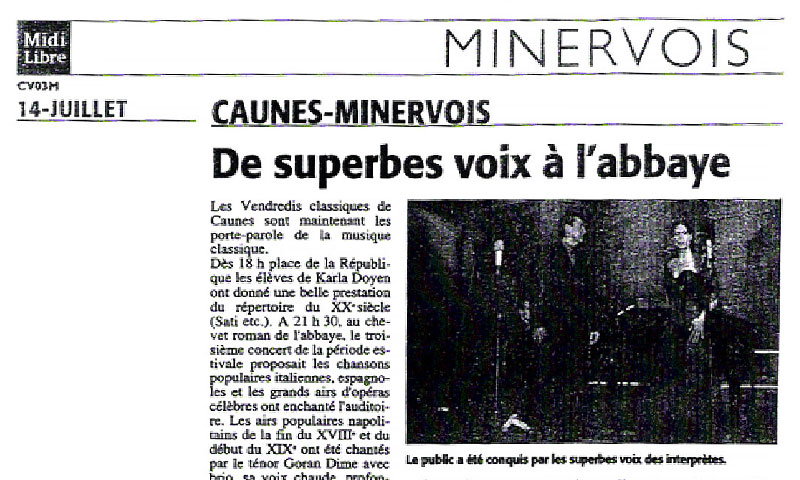 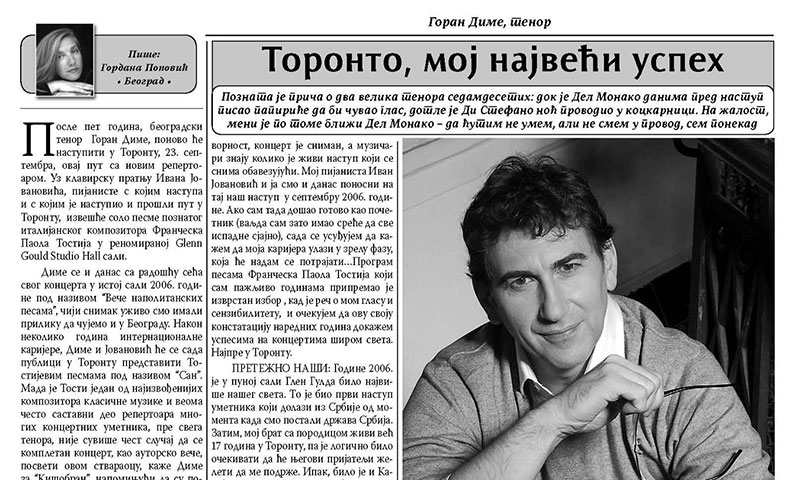 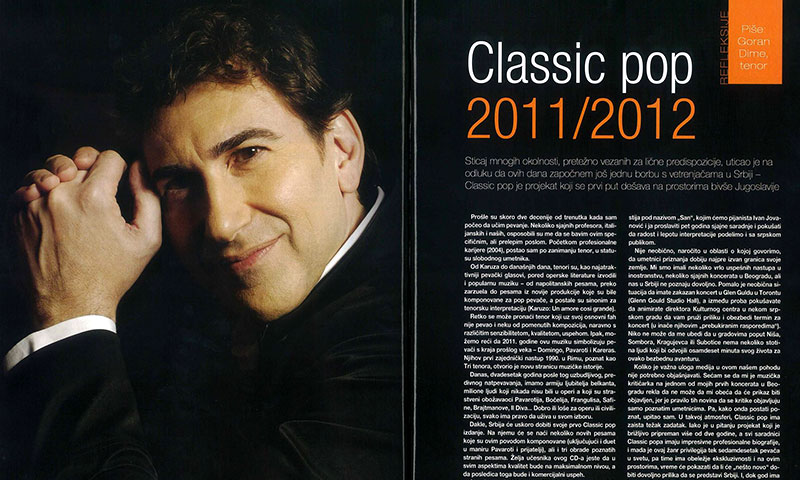 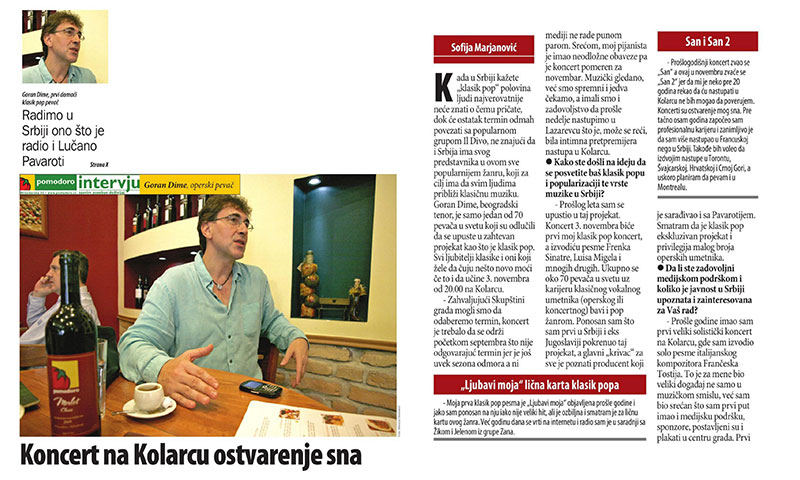